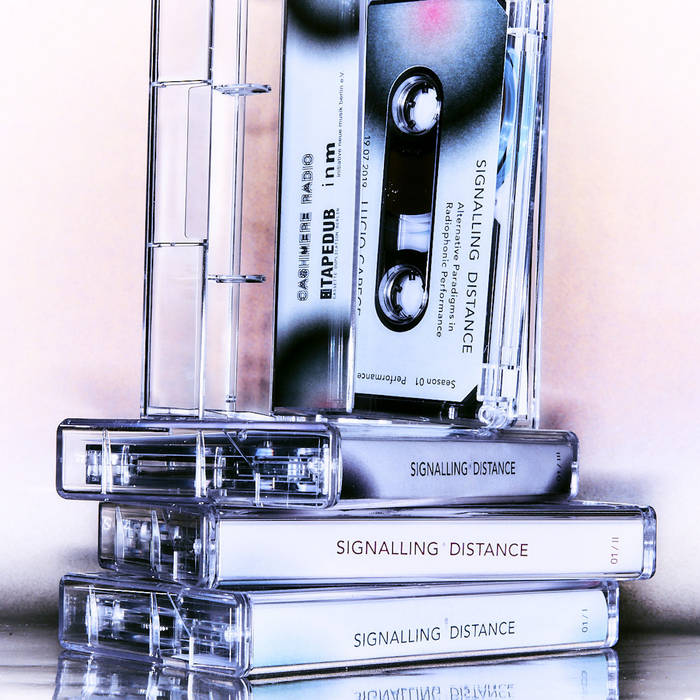 Cashmere Radio is extremely pleased to present its first ever release, Signalling Distance.
The four-cassette set documents a live performance series by the same name that took place at the station’s Berlin studio over the course of 2019. The performance series brought together four pioneering contemporary exponents of electro-acoustic music, all of whom were invited to explore the dynamic relationship between microphone technique, the exigencies of acoustic sound transmission and the spatial complexities of live performance. With a live audience present for each performance (although physically displaced from the source of sound), these radiophonic performances aimed to explore the connections and contingencies between being on stage and on air, as well as the modes of listening for audiences suspended between concrete and virtual realms.

These tapes feature the full recording of each of the commissioned performances by Sauvage, Ulher, Gourdon and Capace. Spread across four cassettes, one per artist, each tape is a fragment offering a unique snapshot into the artists’ discrete practice and the creative links that bind their experiments together.

Tomoko Sauvage’s 34-minute performance, originally debuted and recorded on 04 April 2019, is a stunning point of entry into the series. Working with a “natural synthesizer” of her own invention— an intricate system of waterbowls, flowing water, ceramics and hydrophones—Sauvage's piece delicately unfolds with fragile, shimmering drones and undulations of textured noise. Sauvage playfully engages with sonic representation: her piece both faithfully renders the water, waves and bubbles out of which it is constructed and is somehow always eschews being reduced to it. Replete with gestural flourishes and yet a product of immense, patient focus, it is sure to send the listener into the depths of sonic reverie.

Hamburg-based musician Birgit Ulher’s two-part, 37-minute contribution, is more abrasive and unruly in approach, but no less determined to push the trumpet beyond the bounds of its quotidian use. Originally airing 10 May 2019, Ulher uses extended speakers that are fed with radio sounds into trumpet mutes, transforming the trumpet into an acoustic chamber that modulates and warps noise in the process. The trumpet thus becomes a transmitter and receiver at the same time.
Ulher’s performance counterposes her extraordinary trumpet technique—wrenching gargles, sirens and extended billows from the instrument—to the clanging and crunches of recorded sound, creating ever-morphing scenes of jagged sound and silence.

French minimalist musician Yann Gourdon makes up the third tape in the series with an absorbing 52-minute drone piece, originally aired on 14 June 2019. Having learned to play traditional music from Auvergne by listening to field recordings, Gourdon re-orientates tradition via minimalism, honing in on the singularity of place unique vibratory fields, volumes and surfaces. In this piece, Gourdon performs on a hurdy gurdy with four microphones—one added to the body of the instrument, one on an amp and two in the recording room—to create a dense cloud of melodic drones, as tactile and textured as they are expansive.

Argentinian musician Lucio Capece rounds out the release series with a 50-minute piece incorporating field recordings, noise generators, hanging speakers and slide saxophone. Originally debuting on 19 July 2019, Capece’s contribution is the most subdued of the lot, creating an acoustic environment that is both eminently natural and otherworldly. Operating on the threshold of silence, Capece’s work is no less powerful for it; the work’s delicate and sombre repose imbued with an eerie significance and meaning as it patiently deconstructs the limit between natural and electronic sound.
—
Signalling Distance was made possible thanks to the generous support of Initiative Neue Musik Berlin. Alongside the cassettes, a reportage and interview with each performer and a show maker from the station was made to accompany the live performances. You can find them all on the Cashmere website here: cashmereradio.com/shows/signalling-distance/

Cashmere Radio is a not-for-profit community experimental radio station based in Lichtenberg, Berlin. The ambition of the station is to preserve and further radio and broadcasting practices by playing with the plasticity and malleability of the medium.

Bandcamp Daily  your guide to the world of Bandcamp

Featuring Gary Bartz, 5 years of Rhythm Section Intl and an LP of the week by Nicolas Jaar